TU Delft wants to know which way the wind blows

TU Delft wants to know which way the wind blows 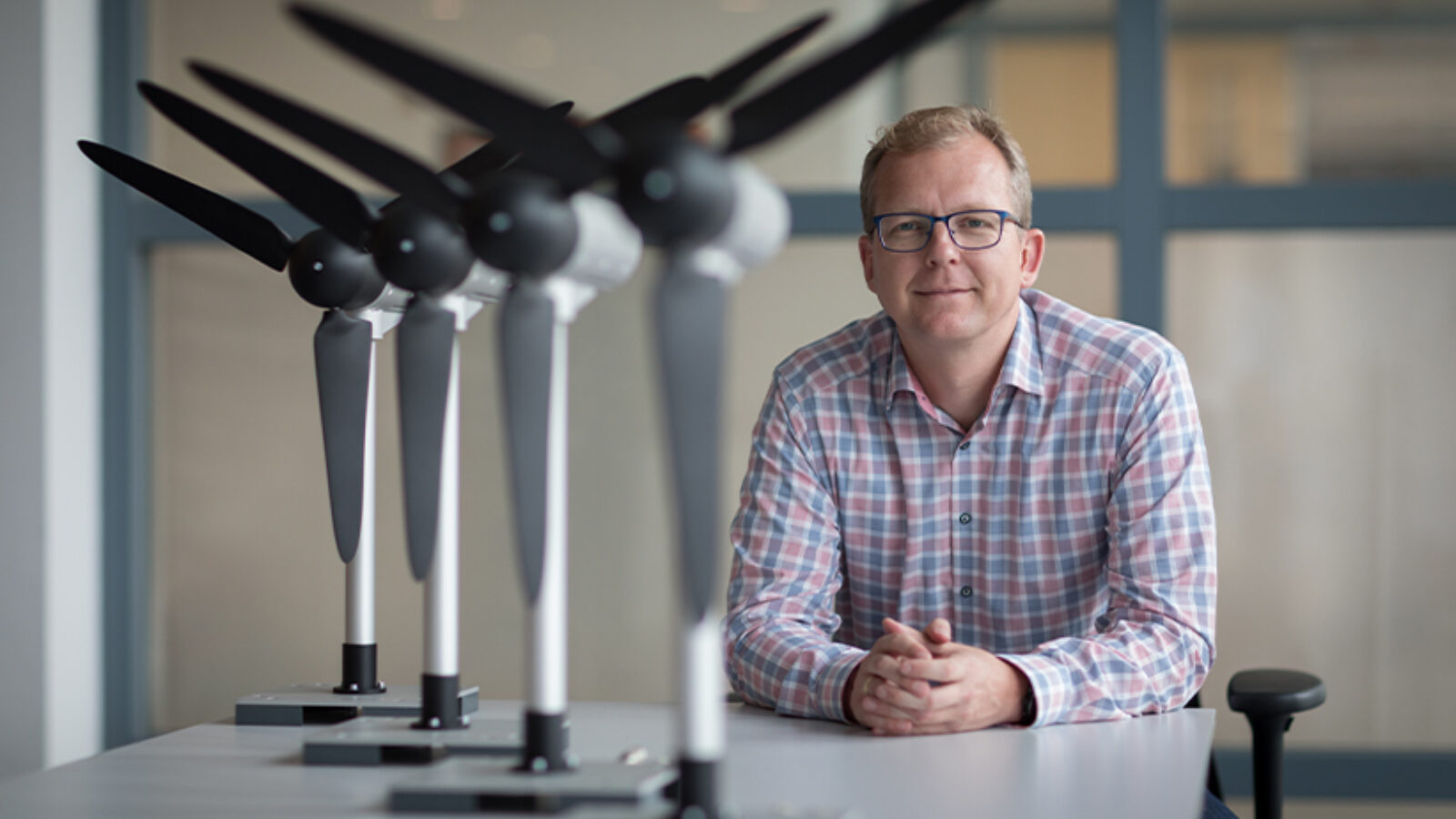 “It’s my latest toy”, van Wingerden says proudly.The Wind AI Lab opens up new, unprecedented research opportunities in Delft. The wind speed was more or less uniform in previous research tunnels. Since October, however, the new wind tunnel has allowed experiments to be conducted with non-uniform wind fields with different speeds. Van Wingerden explains: “As wind turbines increase in size, some with diameters of up to 220 metres, the wind does not hit each area of the rotor blades at the same speed.”

The professor points to a large piece of equipment whose rear wall is made entirely from small fans all stacked up on top of one another, each of which can be controlled independently: “This is how we imitate light to gale-force winds. On the floor, we can install two to three small wind turbines downwind from one another to evaluate how they influence each other.”

In the Wind AI Lab, van Wingerden is primarily focusing on the influence of the wake. This is the wind plume that is created after the wind has moved through the wind turbine. After the turbine has extracted energy from the wind, the wind speed decreases, and the wind becomes more turbulent. This results in lower energy output from the wind turbines located downstream; the turbulence also wears them out faster.

Van Wingerden and a member of his team demonstrate the wake effect. The fans make a din as they blow smoke at a speed of five metres per second in the direction of two small wind turbines set back to back. Although this is only a third of their full capacity, the neighbours above the lab complain about the noise if the fans operate at full throttle. The smoke enables us to see the wake. In the lab, the plume is just a few metres long. Out at sea, it stretches for hundreds of metres behind the turbine.

Limiting loss
Measuring equipment confirms this – as the wind flows through the wind turbines, it loses velocity.We can use another example to explain the wake effect. When you cycle directly behind someone, they protect you from the direct headwind. The effect on wind turbines is a reduction in wind speed, leading to lower energy output from the turbines located downwind. Nonetheless, you can limit turbulence and energy output losses on wind farms by adopting smart control technology.

The professor explains that by putting his team’s ideas into action, the wake effect can be mitigated by using different methods: “First of all, you can eliminate the wake altogether by doing two things. The three rotor blades on each wind turbine need to be programmed individually, creating vibrations in the air. You pitch the blades sinusoidally with a period of approximately 100 seconds. This limits the wake effect. The wind now forms a spiral behind the turbine, called a helix wake, which destroys the wake. The energy output from the first wind turbine remains constant, and the production capacity of the turbines located downstream increases.”

According to van Wingerden, while the energy output from the second turbine is 0.7 megawatts in the full force of the wake, once this is removed, it increases to 3.0 megawatts. Energy output increases by a minimum of 20 per cent. He continues: “Another method is called wake steering or yaw control: the entire rotor is swivelled. This allows you to steer the wake entirely or partly past the turbine downwind, improving its output. Yaw control results in lower energy output per turbine because it catches less wind, but it improves the overall energy yield across the entire wind farm.” This technology is already being tested and applied by manufacturers. Because weather conditions, like the wind, are changeable, it is important that steering can be continuously adjusted. This allows for wind turbines to be positioned closer together so that the available surface area can be used more efficiently.

“During my inaugural lecture”, says van Wingerden, “I showed a video that I made on these various methods. Industry caught on, resulting in a number of follow-up projects. We are now working hard to enhance these technologies and are conducting experiments in stages. We start off here in the lab using these small wind turbines and then move outside and scale up with 400-kilowatt onshore turbines. From 2025, we will be able to test at full scale with 11 megawatt turbines at the Hollandse Kust Noord offshore wind farm.” It is vitally important to find ways of producing energy more efficiently, and van Wingerden is playing his part. The Netherlands, along with a number of other countries, wants to build large-scale wind farms in the North Sea. By 2050, these farms need to be able to produce 70 gigawatts, which is ten times more than current capacity levels.

Hollandse Kust Noord
Professor van Wingerden will eventually see his innovation put into practice in 2025 on the Hollandse Kust Noord wind farm, one of the three areas designated by the Dutch government to produce offshore wind energy. The wind farm, located 20 kilometres off the coast at Egmond aan Zee, will generate enough electricity to supply one million homes with green energy.

“An opportunity like this doesn’t come around very often”, explains van Wingerden. “We can’t believe our luck that we can test there. Of course, it’s still nerve-racking, but up to now, our tests indicate that our ideas work.”

Van Wingerden is collaborating with CrossWind, a joint venture between Eneco and Shell, partnering with Siemens Gamesa, a wind turbine manufacturer. He states that the pioneering research is on the cusp of a significant breakthrough. “Having these large industrial concerns on board is of huge importance”, he says. “They understand the effect on and extent of potential wear to the wind turbines when we adopt this new technology.”

The Wind AI Lab is on wheels. The professor says there is good reason for this: “Eventually, we intend to use the tunnel in our towing tank where we can simulate waves. We will then be able to assess the effects of both wind and water on our scale models and also discover the potential for even greater energy output using floating wind turbines.” It sounds like a lot of fun. He agrees: “Yes, lots of fun!”

“Of course, it’s still nerve-racking, but up to now, our tests indicate that our ideas work.”

Norway and Scotland
According to the professor, floating wind farms are the future: “Scotland and Norway are already working on the technology, and we are going to do the same here. The idea is to mount the turbines on hexagonal structures that allow a certain amount of movement in the waves.”

By using a dynamic platform, he says the wake effect might be eliminated more quickly, and the wind turbines can be positioned closer together. Smart wind turbines that continuously work together can self-regulate and will be able to respond quickly to changing wind conditions, thereby optimising energy output. In turn, the turbines will no longer wear out so fast, resulting in lower wind energy prices.

Unfortunately, the North Sea is too shallow for floating wind turbines. Van Wingerden explains: “To stop the wind turbines from falling over, you need a huge underwater buoy system.”

He also mentions that developing wind farms takes a lot more than just new technology: “The construction works alone are an art in itself. You really need to pay attention to what's already in situ on the seabed. This could be a network of cables or an unexploded bomb from the Second World War. You must also allow for any shipping lanes or routes taken by migrating birds.” 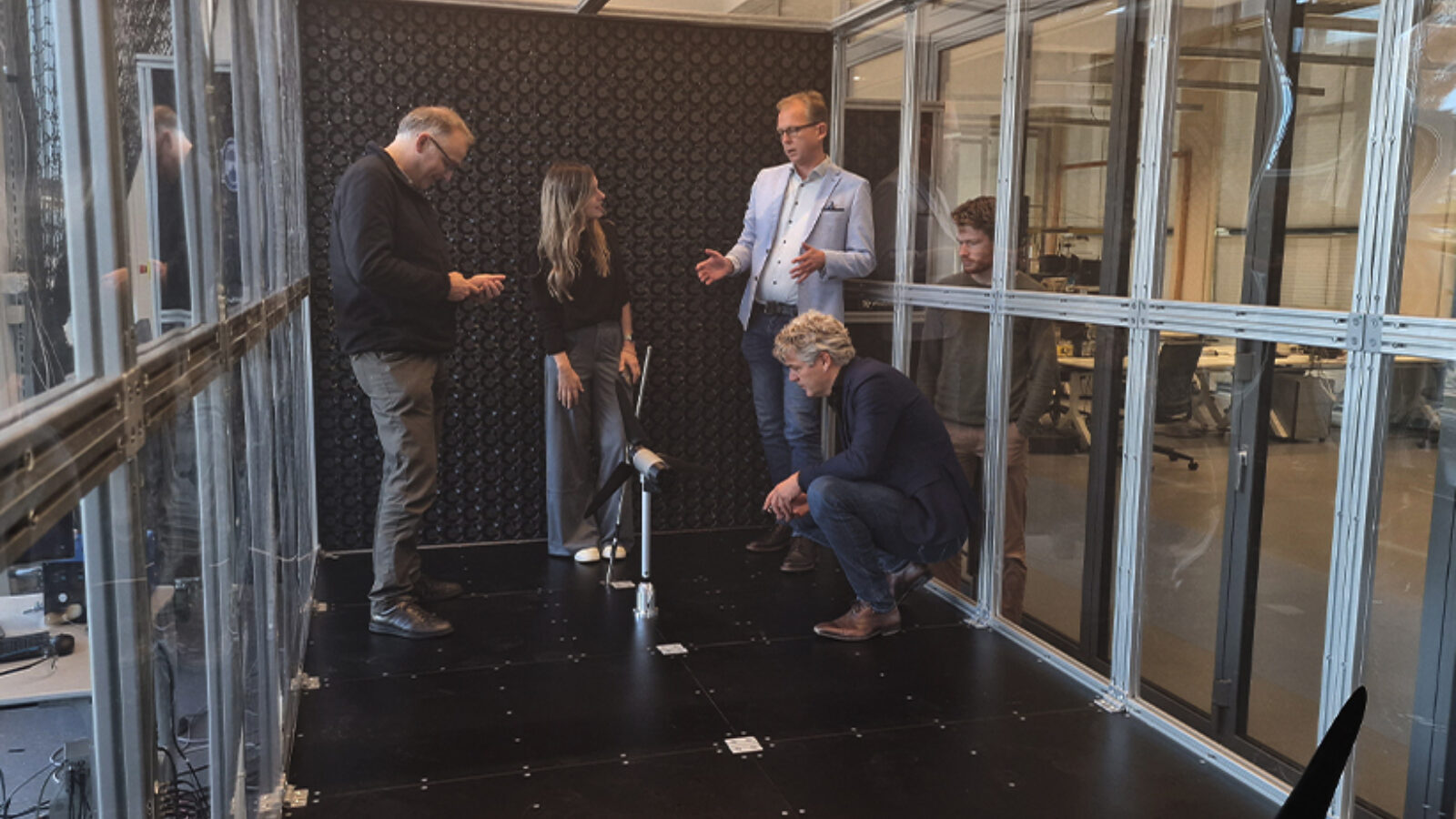